Louise Raw / Bryant and May Matchwomen

Jeudi 28 mars à 17h30 : Louise Raw, autour de son livre Striking a Light: The Bryant and May Matchwomen and their Place in History (Continuum, 2011)
Abstract: This book, about a strike by 1,400 mostly young and female London- matchwomen in 1888,  revealed for the first time that the matchwomen were the mothers of the entire modern labour movement, and not the puppets of Victorian ‘celebrity socialists’ like George Bernard Shaw and Annie Besant, as had been previously claimed. Their strike was a turning point in British history, and sowed the seeds of today’s global trade union movement, and the UK Labour party.
By tracing descendants of the matchwomen, Louise Raw was able to reveal that the wild and wonderful women of Bryant and May were far from helpless ‘little matchgirls’.  They had the respect and love of their families and communities, and actually issued threats to ‘Jack the Ripper’, whose crimes in their East End neighbourhoods began shortly after their victory. The very identities which made the matchwomen ‘the lowest of the low’ to their supposed betters were actually key to their success, the book argues. They shared an Irish heritage, and the London Irish community was politicised by oppression at home, with traditions of solidarity and defiance of authority. They were the friends, neighbours and relations of the mostly-Irish London dockers who began a massive strike in 1889, and whose leaders would urge their men to ‘remember the matchgirls, who won their fight and formed a union’. 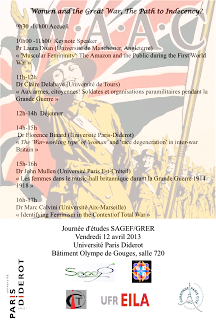 Sisterhood and After - Oral History

The British Library has just launched a unique oral history archive depicting the stories of those involved in the Women’s Liberation Movement, developed in partnership with the University of Sussex and The Women’s Library.
The interviews can be listened to in full at the Library and you can find excerpts on their website at http://www.bl.uk/learning/histcitizen/sisterhood/index.html.
Publié par Alexandrine à 13:27 Aucun commentaire: